The Invest Ottawa Board has just approved our 2015-2018 strategic plans, with a vision to transform Ottawa into “the most innovative city in Canada”.  Innovation has been a difficult concept to measure, but with some new science from our friends at i-Canada and the Conference Board of Canada, we believe we are now ready to support this initiative.

We will be looking to you for help.

What do we mean by innovation? We will find and apply new ways of doing things, which will lead to a more attractive and prosperous Ottawa. The alternative is to resist change and wait until we are forced to play catch up with other cities. From my experience, not a good plan.

The importance of this evolution cannot be underestimated, as the “fuel” for our new economy is talented people. The most talented people want to live in the most progressive and innovative cities.

Some progress to date.

In January, CENGN hit the ground running with a five-city national roadshow stopping in Edmonton, Vancouver, Toronto, Montréal and Ottawa. The goal was to unlock the potential of Canadian SME’s, as CENGN can help bring their technology to market within three to 15 months. The roadshow amassed 400 participants. It was a tremendous success in helping to build Ottawa’s brand.

In February we officially launched our #WhyOttawa campaign. For two years our team has left no stone unturned to prove that Ottawa is an amazing and talented city. The presentation has been downloaded hundreds of times and I’ve been told by business leaders in a variety of sectors, they are using parts of the presentation to promote their businesses. Even The Ottawa Senators are using the #WhyOttawa presentation to recruit players – you can use it to. We think it is innovative.

We also have over 800 ambassadors signed up to promote Ottawa. We are planning a big celebration of their tireless commitment to promote our wonderful city locally and abroad. The recent Shopify IPO has turned a welcome spotlight on Ottawa and we have been able to tell a broader story of success:

A Canadian Press piece was picked up in more than 100 digital and print publications across Canada:

Is Silicon Valley North Really Back?

Investments are on the rise in the Nation’s Capital. Mitel has spent nearly $1 Billion on M&A and Ross Video just completed its 10th acquisition.

With IPOs at Shopify, Halogen and Kinaxis, Ottawa software companies have raised more public money than EVERY city in Canada COMBINED over the last five years.

On May 26, a delegation of 20 senior stakeholders from Ottawa’s ecosystem, led by Mayor Jim Watson, travelled to Queen’s Park for face-to-face meetings with six key Cabinet ministers. The purpose was to show senior provincial decision-makers, that Ottawa is a region with world-class opportunity for economic development and to discuss how to better partner with the Ontario government (how timely this was the same day that Shopify rang the bell on the TSE. What better way to make sure that the Ottawa message was heard loud and clear?). Throughout a very busy day, Team Ottawa met with Ministers responsible for Research and Innovation; Training, Colleges and Universities; Energy; Economic Development, Employment and Infrastructure; Citizenship, Immigration and Investment and Trade; and Tourism, Culture and Sport. Our message was clear: Ottawa’s tech sector is strong, experienced and ready to spark innovation. This was a valuable exercise and one we look forward to coordinating on an annual basis. 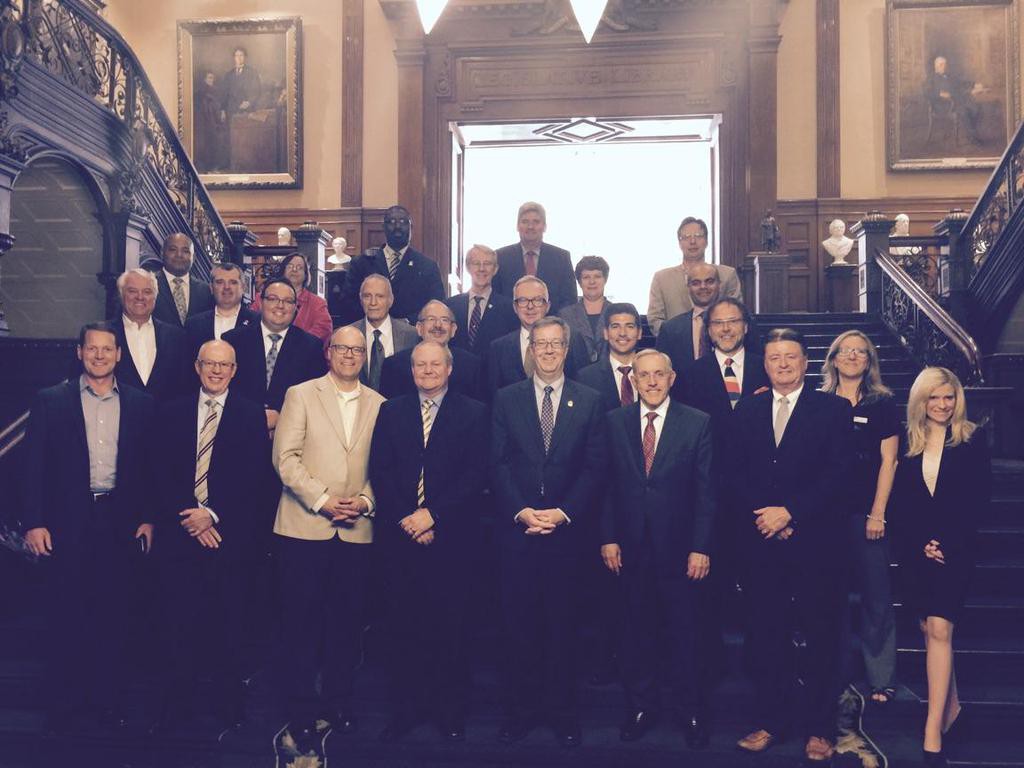 Gymtrack, an IO portfolio company, raised $2.5 Milllon in seed money, which has allowed them to expand their staff and also their footprint. The Ottawa startup has grown from two to 30 people over the last 18 months and moved out of the Invest Ottawa incubator to brand new offices in downtown Ottawa.

NGF Geomatics (Now RME), another IO portfolio company, also graduated from Invest Ottawa, having been acquired by agriculture and construction equipment dealers, Rocky Mountain Equipment. The firm will retain and expand their operations in the Ottawa Valley.

These hungry startups are just the tip of the iceberg when we look at the level of talent and innovation coming out of Ottawa.

Looking abroad, Invest Ottawa signed a landmark agreement with Brazil’s top entrepreneurial ecosystem, PLUG. We will work with them to develop a soft landing partnership that will grow our respective economic communities. Our Investment and Trade team also conducted another successful trade mission to China.

The Capital Angels Network injected $5 Million of seed money into Ottawa start-ups; doubling their amount from last fiscal year and Mistral fund has closed $25 Million in funding and made eight investments.

And finally four of our portfolio companies broke their piggybanks, combined their resources and travelled down to Silicon Valley for a two-week marathon of meetings and networking.

Finally the Financial Times (UK) has announced the results of their FDI Survey of American Cities. Of 77 mid-sized cities in North and South America surveyed by the British media giant Ottawa was named:

Nice recognition from such a credible source. IO latest numbers show that Ottawa has nearly 1700 companies employing over 66,000 people in the knowledge-based industry. In fact, the Conference Board of Canada says ICT in Ottawa has grown eight per cent per year since 2010 – almost four times the national average for growth. The talent pool is deepening and their skills are more diversified than ever.

And this past winter IO facilitated:

All these colours paint a larger picture. Ottawa’s ICT sector is back to levels of productivity it hasn’t seen in years and we seem poised for more growth. The moniker of “Canada’s most Innovative City” seems a real possibility.

What’s Next in the World of Driverless Cars and Smart Cities?