What They Do: Reaction messaging through gifs

Mobile is quickly growing as the most popular way to access information and stay in touch with social networks. Likewise, mobile messaging is quickly becoming one of the next big areas of focus in tech. Millennials are now sending close to 4,000 SMS and chat messages per month, but are looking for new ways to express themselves online. PopKey enables everyone – particularly millennials – to do just that: it involves the use of GIFs (which have been around for a few years now), but allows the user to send them quickly and easily, on the most popular messaging platforms, which has never been done through a keyboard. This app is a product of WorkshopX, which is based in Ottawa. Since the launch in October 2014 – when Apple first introduced third party keyboards with the launch of iOS 8 – PopKey has been ranked in Apple’s Top 100 Utilities as well as in the Top 5 third party keyboards. Amidst the busy schedule of an entrepreneur, Franco Varriano (Head of Growth and Partnerships) agreed to take the time to meet with Invest Ottawa and give us the scoop on his new app:

Give us a brief explanation of what PopKey is.

PopKey is a third party messaging keyboard that allows you to send animated pictures (GIFs) to your friends on basically any platform, such as SMS, email, iMessage, and Facebook Messenger.

What was the light bulb moment that sparked the idea for this app?

Photo of the app on an iPhone (Source: pokey.co)

It was Steven Mackenzie (the Chief Design Officer) who came up with the idea. He was browsing the Internet when he thought, “Wouldn’t it be cool if people could just chat with GIFs?” They could cut right to the point, with no crazy load times or audio that would chew up bandwidth. In the past there had been some GIF chatting applications, but they didn’t work across multiple platform or enable you to easily find the right GIF to share with your friends. Mackenzie has the idea that whenever a keyboard pops up, you should be able to toggle PopKey. You should be able to quickly find the right GIF, whether it’s based off a reaction, emotion or some favorite content that you had already saved and then quickly and easily share it with your friends.

Do you feel as though this will replace the popular Emoji keyboard?

We see it as the natural evolution of them; one thing that has contributed to the rise of GIFs is that it’s hard to add a new Emoji to the keyboard. They are great, however they are static and I think there is so much more that can be communicated through the short, infinitely looping video. What makes a popular GIF is something that you’ve already seen and can connect with, whether it’s from a TV show or movie, you can really relate to it. There’s almost this nostalgic feature that’s psychologically tied to a GIF, and based on what we’ve seen get shared the most, it’s that recognizable aspect that impacts people and the way they want to communicate. There’s an emotional connection when you see the visual cue and the memories you’re trying to communicate. 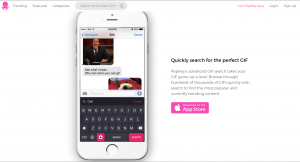 Which GIF is your personal favorite?

There are so many, I don’t even know! It would probably have to be something either off the Simpsons or Jurassic Park. I am a huge Jurassic Park fan. The weirder the better, particularly the nostalgic stuff.

In what ways has the Ottawa ecosystem helped the development of this app?

A ton: there’s definitely an awesome ecosystem that’s developing here in Ottawa. There’s a network of people who have definitely been key to advise on how to grow this app and take it to the next level. Another benefit to Ottawa is that we are able to focus on getting our work done here. It has been a tremendous help and it’s definitely a great city to come back to.

Innovation in technology is a hot topic right now. What gives your app the competitive advantage? First, it’s building the best product out there. It’s not something we just slapped together; it takes a lot of time. Second, design and user experience are also huge. We feel like we are more connected to Millennials through the design. The third thing is we spend a lot of time thinking, especially with brand partners, on what we call reaction messaging. Our keyboard content is all built with mobile first & chatting in mind. We specifically curate [the GIFs] towards something that people would use in the context of a conversation, which makes the overall use of the keyboard a lot better than others because you’ll find the right content, for the right chat, at the right time.

If you could choose a GIF to define Ottawa, which would it be?

For Ottawa, I’d probably do a mashup of all the major landmarks and sports teams. Definitely need to have Parliament hill in there, or do a time-lapse GIF.

One thing never to underestimate?
Never underestimate the amount of work that is required. Make sure that you and your team are focused on putting something awesome that people will love out there.

Franco Varriano, Head of Growth and Partnerships at Popkey